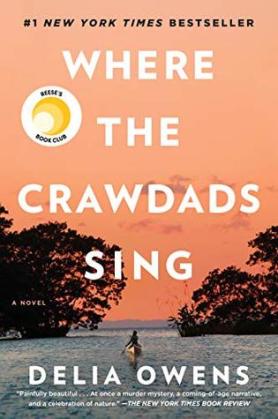 “Most of what she knew, she’d learned from the wild. Nature had nurtured, tutored, and protected her when no one else would.”

A lovely, thoughtful book about nature and one woman’s relationship with it.  Popularized as a coming-of-age story with a dash of murder mystery, Where the Crawdads Sing is truly about Kya Clark, who becomes a child of her marshland home when everyone else abandons her.

Where the Crawdads Sing begins with Kya’s childhood and her mother’s abandonment.  As she ages, Kya watches her family slowly crumble until she finds herself alone in the marshes of North Carolina. Outside the bounds of civilization, Kya grows up half-wild, sensitive, and highly-attuned to the nature of the marshland.

There is a particular kind of man vs. nature narrative (or, more recently, woman vs. nature and woman in nature) that celebrates the setting as much as the character interacting with it.  In addition to Where the Crawdads Sing, a few other books in this genre include Kristin Hannah’s The Great Alone and sections of Neil Gaiman’s American Gods.  These narratives read like love letters to their settings, and that devotion really resonates with me as a reader.  In Where the Crawdads Sing, Delia Owens’s attentiveness to the marshlands of North Carolina shines through her descriptions of nature and Kya’s traits as a vulnerable, slightly feral woman. This style can be slow for readers – Kya does spend loads of time frying grits and digging up oysters – but I really appreciated Owens’s dedication to the minutiae of setting a story.

Side note: if you enjoy audiobooks, consider adding this one to your library.  Cassandra Campbell’s narration is, as always, spectacular, and Where the Crawdads Sing is perfect to listen to while hiking through state parks or taking the dog for a walk.

Another strong aspect of Where the Crawdads Sing is the characterization. Kya is a fascinating lead, often behaving more like a wild creature than a human being.  Despite growing up alone and uneducated, Kya becomes an expert on her marshland home.  This meteoric growth initially struck me as unbelievable, but plenty of people have taken unorthodox means to follow their passions to great success.  Some characters – like Jumpin and his wife – ring as cliché, but on the whole, the rest of the cast are well-rounded and likeable.

Lastly, Kya’s separation from civilization makes for an interesting perspective on society.  Kya doesn’t see the boundaries that divide people, and so connects with people of different races and social classes with ease.  It’s a neat – if not very original – look at the ridiculous rules people invent and how unnecessary they are.

Where the Crawdads Sing is a thoughtful love letter to the marshlands of North Carolina with nods to the coming-of-age and murder mystery genres.  Fans of slow, introspective works won’t want to leave the marshlands of Barkley Cove, and to me, that allure justifies this book’s place on the bestseller list.

This is a text widget, which allows you to add text or HTML to your sidebar. You can use them to display text, links, images, HTML, or a combination of these. Edit them in the Widget section of the Customizer.
Loading Comments...
Comment
×
%d bloggers like this: