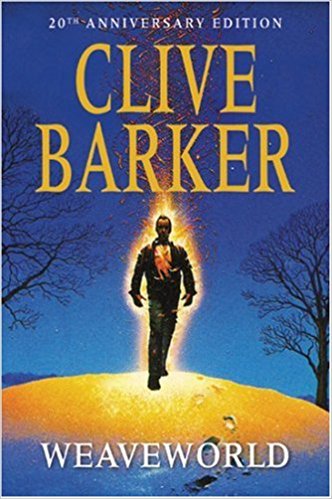 “And this story, having no beginning, will have no end.”

Well, it certainly felt like it would never end.

This is the first book I’ve read by Clive Barker, and frankly, I think it will be my last.  It was a long slog from beginning to end, so much so that I considered quitting multiple times.  Ultimately, the only two things I enjoyed about Weaveworld were 1: the fact that I finished it, and 2: that it was narrated by the glorious Simon Vance.

Weaveworld is Clive Barker’s door-stopper of a book about Calhoun Mooney, a young man who glimpses a magical world interwoven into a carpet called the Fugue.  When the Fugue comes under attack by a sorceress called Immacolata and her partner in crime, Shadwell, Cal must join forces with the pragmatic and magical Suzanna to save it.

If I’m being honest, the main reason I picked up this book was that it was set, at least partially, in Liverpool.  Having gone to school there for a semester, I developed a love for the city and wanted to see it endowed with magic.  Much to my dismay, Clive Barker’s particular blend of fantasy and horror isn’t remotely to my taste.

I feel like I need to put a disclaimer here:  I don’t mind reading about sex.  Sex in books can be pretty grand.  The same goes for magic and horror.  But Clive Barker’s merging of the three in Weaveworld was over-the-top, tasteless, and honestly?  Irrelevant to a lot of the plot.  In the first few chapters, readers are treated to Immacolata’s lust-filled, ectoplasmic sister (yes, you read that right), the Magdalene, who frequently rapes men and gives birth to abominations as a result.  The Magdalene’s first victim is Elroy, who never appears after that scene because he was just a walking sack of semen waiting to be molested for chills and thrills.  Cal is similarly assaulted, but this event – as well as the abomination born from it – is irrelevant to the plot.  Weaveworld is full of instances like this, ranging from Cal’s wet dreams on an orgy hilltop to the smell of a bird girl’s genitals as she flies overhead to the random men who are incinerated mid-fuck (though it’s ambiguous as to whether that was another rape scene or not).  Those are just the scenes I can summon on a whim; Weaveworld has them in spades.

In essence, the horror and fantasy in Weaveworld read as if cobbled together on a whim; as if Clive Barker thought of something wild and horrifying and put it in his book without consideration for how it would support the plot or affect the characters.  It feels simply gratuitous.

Furthermore, the plot of Weaveworld leaves something to be desired.  There is no sense of rising tension or stakes, no rewarding character progression, and no clear motivation for any of the characters.  Why do Cal and Suzanna feel compelled to protect the Fugue?  Why is Shadwell so keen to destroy it?  None of these questions are believably answered.  As a result, the reader’s motivation to continue is stymied from the start.  (I got to the point where I didn’t care if the Scourge destroyed the Fugue or not – I was almost rooting for Uriel to incinerate everyone so the book would just fucking end.)

Lastly, from a purely stylistic perspective, Clive Barker’s writing is frustrating to consume in audio format.  Simon Vance is a wonderful narrator, but even he couldn’t make the stiff diction and endless rambling palatable.

To be fair, Clive Barker is hailed as one of the great fantasy/horror writers of our time, and that kind of reputation comes with polarizing views.  Some people love his work and some hate it.  Unfortunately, I seem to find myself in the latter category.

This is a text widget, which allows you to add text or HTML to your sidebar. You can use them to display text, links, images, HTML, or a combination of these. Edit them in the Widget section of the Customizer.
Loading Comments...
%d bloggers like this: